I know most Anglo-Quebecers look at this election with a measure of unease with some of the policies of my party, the Parti québécois. I get that.

But I’ve talked with enough Anglo-Quebecers these past 18 months to know that they often give credit to the PQ for good government and that they resent being taken for granted by the Liberal Party. I know, also, that they loathed the climate of corruption and collusion that was prevalent under the previous Liberal government. And they surely don’t want it to come back.

These past weeks, a lot of allegations have been thrown around. a Tax haven for Couillard, leadership financing for Marois. Shadows of facts.

But this should not mean that integrity is not a foremost issue at this point of Québec’s political history. So let’s focus on the absolute certainties we have and ask this question:

Who should they trust to keep Québec on the straight and narrow in terms of integrity?

The case for the PQ is crystal clear. We asked for the commission of inquiry that the PLQ opposed. We voted bill 1 to force every company in Quebec wanting to contract with the public sector to get an integrity certificate. We stood up to giants like Dessau and SNC-Lavalin and barred them from all public contracts for over a year untill they proved they had changed their ways — and they are still under scrutiny.

We made fake-name contributions to parties disappear by reforming both Quebec and municipal party financing. We got a law in place that enables citizens to get rid of mayors under accusations for fraud. We lenghtened the mandate of the Charbonneau commission and gave all necessary resources to the police to follow every lead. And they went all the way to the man the Liberals protected all these years, Mayor of Laval Gilles Vaillancourt, now accused of gangsterism.

It is hard to find, anywhere in the world, a government that made so much, so quickly, to cleanse its political and corporate stables.

So that’s our track record. We are immensely proud of it, and determined to go even further. Determined to make Quebec a modern example of how best to fight corruption.

What about Philippe Couillard’s record ?

His friendship with indicted fraudster Arthur Porter might well have been benign. His negociating his job with a private health care provider while he was minister of Health and in position to help his future boss is, at best, borderline, and no longer allowed.

Beyond that, has he shown that he is up to the task of turning the page on his party’s bleak past ? Let’s look at his record before and since he became leader.

The silent minister and citizen 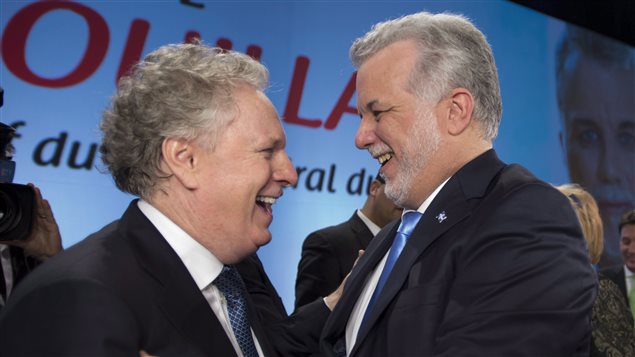 Couillard had made no gesture to distance himself from Charest

While he was in Jean Charest’s cabinet, he was asked to rake-in 100 000$ a year for the PLQ, which put him, and his colleagues, on very treacherous ethical grounds. Did he ever refuse, even denounce the practice ? No. He was silent. Acquiescing. When it came to light that Charest took in 75 000$ a year from these donations to line his own pockets and that he never admitted it in public, what did Couillard say ? Nothing.He left office and regained his freedom of speech in 2008. How did he use it when it became public that the PLQ chose judges by affixing partisan post-it’s on their resumés ? What did he say when his former colleagues voted 11 times against the creation of a public inquiry on construction ? Nothing. He remained completely silent. From 2009 to 2011, every public figure in Québec was called upon to take a stand and pressure the Charest government into setting up a Commission of inquiry. Other Liberals, such as former PLQ president Robert Benoît, had the courage to stand up. In the end, even the FTQ was compelled to publicly ask for a commission.

So where was Couillard when 80% of Quebecers asked for the commission ? When even a lone PLQ member had the guts to go to the mike at a PLQ gathering to ask for one ?

The failed leadership test of integrity

When he became leader, everyone expected Philippe Couillard to make a clean sweep, to distance himself from the Charest years of denial and obfuscation. I certainly did. Claude Ryan did that when he replaced Robert Bourassa in 1977.

But we never heard of any internal inquiry by Couillard, any distribution of a new set of rules, any statement that this was then and this is now. Granted, there was an attempt at adopting an ethics code. But it failed. Couillard was unable to garner a majority for an ethics code at the PLQ, a notoriously disciplined party. Unbelievable.

Couillard took four deliberate actions on the integrity front. First, when the UPAC came down to look for proof of wrongdoing in the PLQ headquarters last summer, Couillard decided to hide this fact from the public for two long months. Then, when the Charbonneau commission wanted to use tape recordings pertaining to the financing of the Charest campaign in Sherbrooke, Couillard instructed the Liberal lawyer to stop the release of the tape. It failed.

When the information was released, Jean Charest issued a statement saying he was beyond reproach. What did Couillard do ? Ignore it and say Mr Charest is old enough to answer for himself, thus putting much needed distance between him and the former leader ? No. He held a press conference and fully supported Mr Charest’s stance and reputation. Very risqué, if you ask me.

He made another important political call. The PQ feels much needs to be mended to build back public confidence towards politicians. One way is to punish politicians who break their moral contract with voters in their ridings when they resign, for no good reason, and trigger a costly byelection. Let the selfish MNA resign, we say, but without the severance pay. The measure is very popular. We could have adopted it. Couillard said no. The reason ? He was protecting the pocketbook of two of his own: soon to resign Raymond Bachand in Outremont and Emmanuel Dubourg in Viau.

The pocketbook of a rival (Bachand) and of a minor figure (Dubourg) were more important for him that taking a further step to reestablish public trust. Sad.

What if he’s elected ?

The Couillard record is clear. He is no Eliot Ness. He is no crusader for integrity. He’s trying to shun the issue, to hide it, not to fight it.

In the unlikely and unfortunate event of a Couillard-led PLQ government, what is bound to happen ? Court documents show that the UPAC is closing in on 11 Liberal operatives involved in a scheme of illegal financing involving millions of dollars. We see on TV policemen trying to link Jean Charest’s friend, adviser and bagman Marc Bibeau to alledged fraud in the Train de l’Est construction, rife with cost overruns under Liberal management.

The UPAC is one heartbeat away from exposing the Liberal system. Il would probably do that in the first year of a Couillard government. [So it took a bit longer.] The scandal could render it catatonic.

How would Philippe Couillard manage it ? There are only two things Mr Couillard managed in public life. He set up the CHUM and the CUSM. Of the two directors he left behind, one is now indicted, the other was shown the door. Scandal and cost overruns tarnished both nascent institutions. That is his managerial legacy. As a leader, he clearly failed to show strenght and purpose on the integrity issue.

My Anglo friends may disagree with Pauline Marois and the PQ on many issues. There will be democratic debates and votes on important matters. But for those who feel integrity in politics is paramount, the choice is clear.

A shortened version of this article was published in The Suburban

18 réflexions sur « If I were Anglo, I’d worry about this guy Couillard »