From the shock of ideas springs forth light.

I am grateful for the invitation that was extended my way from Dawson college to come and speak to you today.

All my life, as a journalist, a political aide, a scholar, a member of the national assembly, a minister and now as the leader of the Parti Québécois I’ve worked so that new ideas would breed to the benefit of all.

For many years, I was seen as a bit of an iconoclast, a straight shooter. Someone who would speak truth to power. It was my trademark.

Now, as the leader of the independence movement, the shock of ideas is as important for me as ever. And I will gladly accept invitations to engage and debate, as I’m doing today.

First, a few words about the terrible events that struck Quebec city. On that day, 6 men lost their life, victims of hatred, contempt and ignorance. 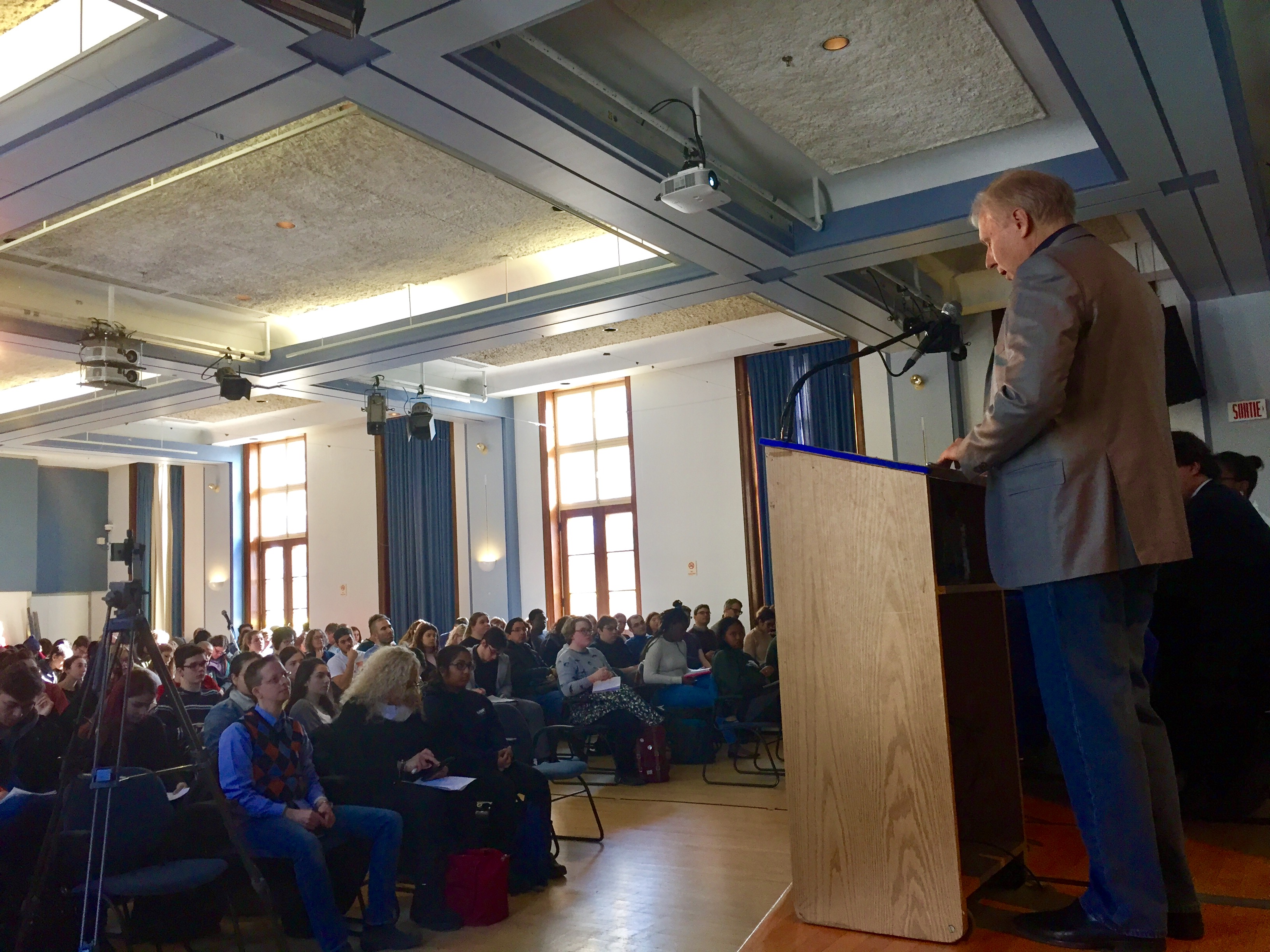 On Sunday the 29th, 20 kids were left without fathers, without a steady hand to guide them in life.

Then, almost immediately, those kids gained a community. In Quebec city, and everywhere in Quebec, people grieved together, mourned together and grew closer.

And I know that for people in this community, the Dawson community, those meaningless violent acts hit closer to home. As your director Richard Filion said «we know how people feel, because we felt the very same not so long ago».

This is not your grandfather’s PQ.

But this isn’t your grandfather’s Quebec either.

Historically, the PQ has been the party of great reforms.

PQ founder René Lévesque noted that corrupt money circumvented the laws and pushed, with Pauline Marois, for a complete overhaul of the political finance laws.

Pauline Marois created universal daycare for children in Quebec, and thus allowed tens of thousands of women to get out of their homes and back to work. This is a measure that is still celebrated today and that other provinces want to emulate.

20 years ago, equity pay in public and private sector was not a reality in Quebec. Except for the MNA’s.

It was under premier Landry that we created the business environment needed by the videogames industry in order to dominate the world. Look at Ubisoft and others now.

But then, along the way, we lost some of our original spark.

On many subjects, we weren’t as clear as we should have been. We wavered. Were we still the great left-of-the-center party we once were ? Where were we exactly ?

On the environment. We closed our only nuclear plant, invested in wind power but still dabbled in oil.

On independence too, there were mixed messages.

Some thought we were secretly planning a referendum, others that we weren’t interested in this idea at all.

Now our message is clear. And it is central to the case I’m making here today, and will be making elsewhere in Quebec for the next months.

We know that a lot of Quebeckers are dissatisfied with the Couillard government. Poll after poll, stricking numbers of people are saying so. 62% in the last Léger poll, including 40% of non-francophones.

But we also know that a lot of them are not coming to us for fear that we might call for a referendum on independence in our mandate.

We won’t. And we won’t use any public money to promote independence either.

This is a pledge I’m taking here today. If you’re not satisfied with the present government and you want to oust them, then feel free to come to us.

I campaigned for the leadership and said: no referendum in the first mandate. Pundits from all across the board said that I couldn’t win, and couldn’t sell this to the PQ rank and file. I did.

I put it up for debate in our latest policy convention. Then again, pundits foresaw a difficult time for me with PQ brass. It didn’t happen.

Because everyone understands that the next election is about beating the liberals. That the single greatest gift that we can offer ourselves in 2018 is to get rid of this government who antagonises public services, public servants, the elderly, the poor and the list goes on.

We lifted the fear of the referendum so dissatisfied liberal voters could come to us.

And we know that there’s a lot of them.

Because the liberal party failed many communities. And I am saying this here at Dawson knowing that it is a very multiethnic college. Many of you were not born in Canada.

Unemployment in Quebec for newcomers, is 10%. For people arriving from north-africa, 17%. Almost the double. And I can’t help but say that the Liberals were in power for the 15 of the last 16 years.

Philippe Couillard himself admitted to the Gazette being out of touch with Anglophones.

It’s their policies who fail. It’s their ball game.

This brings me to another topic: our common language, French.

Guys, we have a problem, here. And you’re not the problem.

The Quebec community group network recently measured that half of the young anglophones they surveyed didn’t feel that they could work in French. They don’t feel competent enough to do so.

The advisory board on english education came to the very same conclusion and suggested that we double the French classes in anglo cegeps such as this one.

If we don’t give you the skills you need to thrive in the Quebec Job Market, we fail you. We might as well, with your diploma, hand you a one-way ticket to Toronto or to Ottawa.

Look at the figures.

We have to make sure that when you’re done with your studies, you can succeed here, launch your start-ups here, and be full participants in Montreal and Quebec’s future.

We can’t afford to lose you.

The Parti Quebecois needs to work hand in hand with community leaders in order to right this course.

And I know that this might feel discordant. But I warned you: this is not your grandfather’s PQ !

Yes, I also want strong measures to protect French in the workplace in Quebec. I want people to speak in English, Mandarin or Spanish on the phone with clients. But then to communicate in French with coworkers once they hang up.

It is only normal for the only French government body in America to want to keep and promote its difference.

But never, never at the expense of its historic anglo community.

At the same policy convention, I was asked by journalist if I would, as some PQ governments did, rationalize services for the English cities or borough. The answer is no. That’s a red line for me.

I believe in meshing, not building walls.

I also have measures for businesses.

My father was a small business owner in Thetford Mines. I had front row seats for his trials and rewards of being his own boss. To help entrepreneurs, sometimes, governments must get out of the way.

In 2009, 7% of the adult population wanted to start an enterprise.

And for 18-34 years old. Millennials, 42%. And here at Dawson I know that many social science students are in a commerce profile. Some of you want to go to John Molson or HEC and start your own business.

This is great news. Our job is to help transform your ideas into successes. Into start-ups. It will be the guiding principle of my leadership as PQ leader, and of my tenure as premier.

Just this week, I put forward many ideas to help integrate more newcomers and Anglophones into the workforce.

Notably, anonymous résumés, to put an end to hiring discrimination. A job doesn’t require skin color or gender. It requires skills, and intelligence.

I will also push for students exchange within Quebec. How many of you have been to Gaspé or Alma ? It’s far, but it’s beautiful, believe me !

Finally, I would like the public service to reflect a bit more the actual face of Quebec.

This includes boards in the public sector, where newcomers and Anglophones are underrepresented.

In order to become the leader Quebec can be in a global economy. Quebec needs you.

In order to become the leader Quebec can be in these challenging times, Quebec needs you.

There are 13 000 members of the PQ under 40 years old. That’s three times more than the liberals. That’s more than the whole CAQ or Quebec Solidaire membership.

And I would like for you to consider becoming one of them.